My two great loves, the outdoors and food!

I started cycling in the summer of 2010 after being inspired by the Pyrenean mountains and the excitement of an old friend at what he deemed 'natural' ability.. the validity of such opinion was probably distorted by a distinct insult to his masculinity when I beat him to the summit of La Tourmalet - albeit he was carrying more than his share of camping equipment!

So that was it, I was hooked on a sport that encompassed two of my great loves: The freedom of the outdoors and large quantities of food :)

I joined the University of Manchester Cycling Club the following September. I was relatively unfit compared to most of the other members at this stage, but I continued to turn up for training rides having forgotten how painful the last one had been! Eventually I rode myself fit! 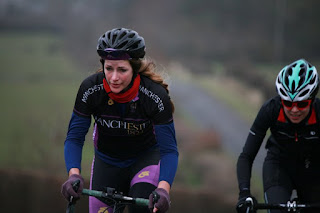 Throughout 2011 I entered a few of the CDNW races, which I enjoyed, though they were lacking in women riders. I rode the BUCS road race, 10 mile TT, 3-up TT, and hill climb for my University club, which I aim to do better in this year!

Over the winter I have been building a base for the coming season. Many long cold hours, strength training and skills sessions have improved my fitness to a level that cultivates excitement for 2012. I'm also looking forward to increasing the intensity of this training with the arrival of the New Year...

I am very excited to be competing at a range of women only events which I didn't really have the opportunity to race last year, as a new rider for Maxgear/Champion Systems team this year including local and national road races, crits and time trials. Most of these are incorporated into the Women's Team Series and National Women's Road Race Series.

Well I guess thats it for now... I'm looking forward to meeting my new team mates at the Maxgear Team launch on 21st January at Matfen Hall! Very exciting times!

Frankie x
Posted by Maxgearette at 07:32 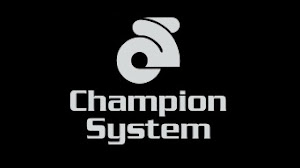 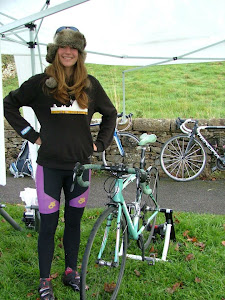 Frankie getting ready for 2011 BUCS HC